Oxbow Associates, Inc. has more than 50 years combined experience in wetlands science and the evaluation and study of rare animals and plants. Oxbow has obtained wetlands and threatened and endangered species permit for diverse clients since 1991. In addition to a full range of wetland delineation and permitting services, Oxbow specializes in permitting and field studies of herpetozoan species; turtles, snakes and amphibians, native to the New England, botanical surveys of rare plants and communities and invertebrate investigations.

Oxbow Associates provides wetlands and rare and endangered species services to clients in Massachusetts and all adjacent states. Clients include utilities, engineering firms, site developers, government and municipalities, conservation organizations and homeowners. In Massachusetts, Oxbow Associates has successfully obtained Conservation and Management Permits on behalf of clients since the inception of the Massachusetts Endangered Species Act (MGL, Ch. 131A). Our Conservation and Management permits obtained pursuant to the Massachusetts Endangered Species Act include complex, multi-species project sites from Cape Cod and the Islands (Nantucket and Marthas Vineyard) to the Berkshires. We have also worked in bordering states (NH, CT, RI, NY) and assisted project teams through their applicable rare species regulatory review.

One of the most valuable assets we have at Oxbow Associates is our broad network of associates. Our President and Vice President have been involved in many research projects, conferences, and workshops resulting in an expansive network of environmental connections. If we do not possess first-hand expertise on a given topic, we can call on our network of “Associates Scientists” to fulfill the Client’s needs. 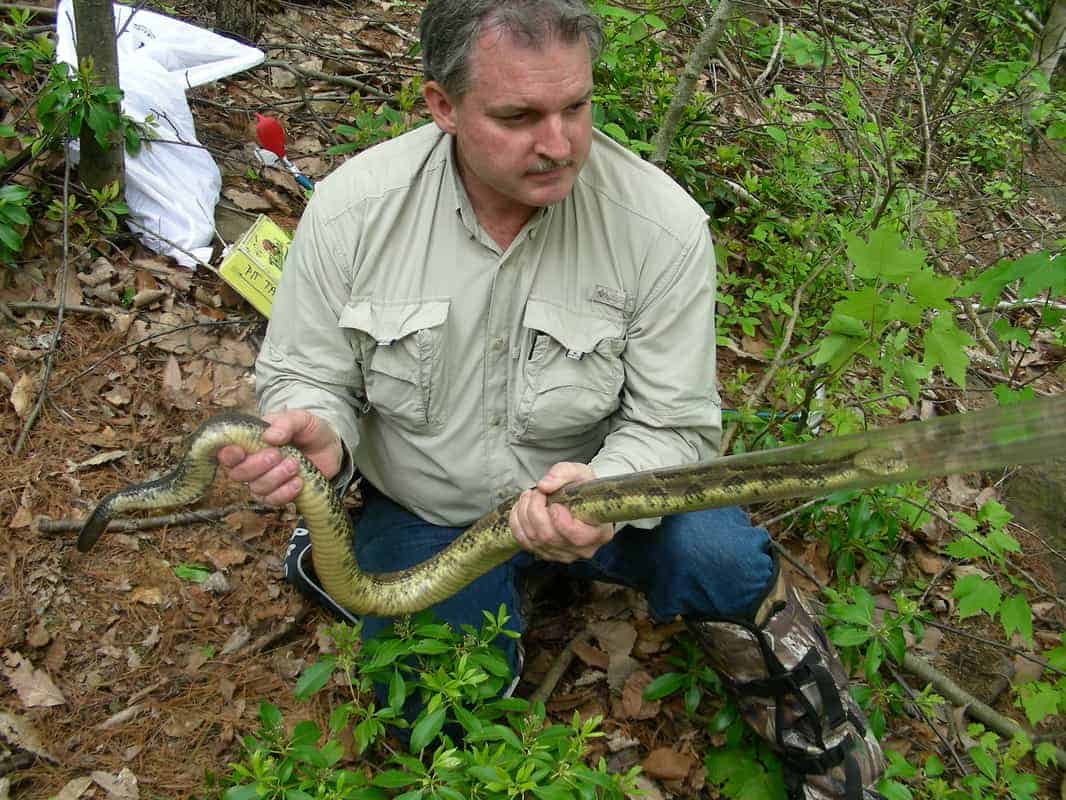 Mr. Butler is the President of Oxbow Associates, Inc., a wetlands and wildlife consulting company providing a broad range of wetlands and ecological services and specializing in rare and herpetofaunal wildlife study and mitigation. He has studied the ecology of amphibians and reptiles, particularly turtles native to the Northeast, for more than twenty-five years. He has conducted field work with the ten turtle species native to southern New England and has conducted studies and field investigations of several species of rare salamanders and a variety of vernal pool taxa. Mr. Butler has also conducted taxon-specific and general habitat and impact assessments for development projects in Massachusetts. Mr. Butler has consulted on projects with potential impacts to rare wetlands wildlife species ranging from subdivisions to highway expansion and military base conversions.

Mr. Butler conducts wetlands delineations, permitting and design of wetland restoration and mitigation plans and reviews wetland delineations for conservation commissions in Massachusetts. He has completed the Federal 40-hr. Federal Wetland Delineation Methodology Course and has obtained his Unmanned Aerial Systems (“drone”) pilot (FAA 107) license, and was certified by the State of New Hampshire as a Wetland Scientist. He presents workshops on wetlands ecology for regulators and special interest groups and has authored six peer-reviewed publications on northeastern turtle species’ biology and numerous popular articles and presentations on wetlands and wildlife subject matter. 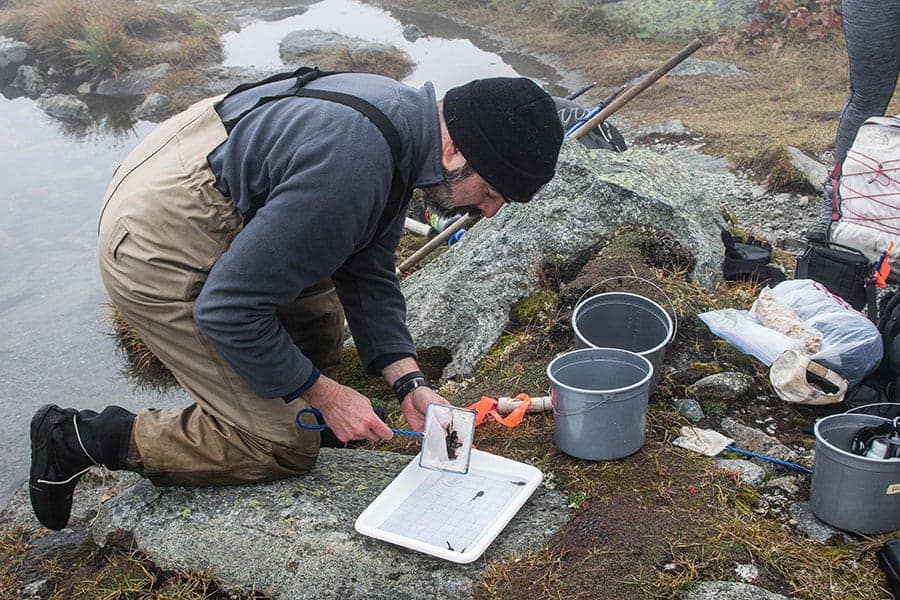 Mr. Smyers is Vice President and Senior Scientist and recently became a partner at Oxbow Associates, Inc. a wetlands and wildlife consulting company specializing in rare amphibian and reptile study and mitigation. He has studied the behavior and ecology of amphibian and reptile species native to the eastern United States for more than 20 years. He has conducted field research, including radio-telemetry, on freshwater turtles Blanding’s turtle (Emydoidea blandingii), spotted turtle (Clemmys guttata), eastern box turtle (Terrapene carolina), and wood turtle (Glyptemys insculpta); as well as two venomous snakes: copperhead (Agkistrodon contortrix) and timber rattlesnake (Crotalus horridus). He has also led field studies for pond-breeding amphibians using various trapping techniques. His experience with amphibians includes laboratory studies of three species of pond-breeding salamanders in southern Louisiana including Ambystoma opacum, A. maculatum, and A. talpoideum. 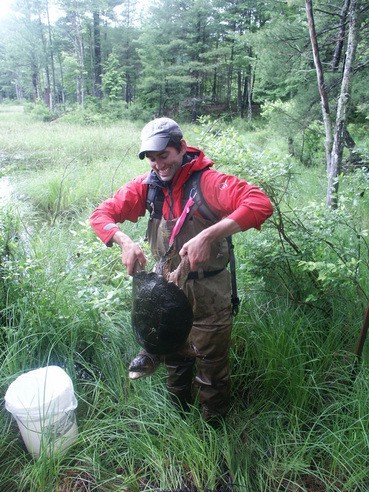 Mr. Strohsahl is a Professional Wetland Scientist (PWS #3243) at Oxbow Associates, Inc., where he specializes in providing wetland and rare and endangered species permitting. He has helped obtain permits at the local, state, and federal levels for a variety of project designs, ranging from individual residential properties to expansive subdivisions, and complex projects including renewable energy, transportation, linear utilities, and other large-scale industrial projects.

He earned his Bachelor’s Degree in Biology with a focus in Ecology at Providence College. After graduating he worked with the Barbados Sea Turtle Project helping to gather scientific data on the nesting success of the critically endangered hawksbill sea turtle (Eretmochelys imbricata).

Early in 2016 he completed Pennsylvania State University’s Post-Baccalaureate Certificate in Geographic Information Systems (GIS), with coursework in database management, and programming using Python within ArcGIS. He is skilled in data interpretation and presentation, and can produce highly-detailed mapping figures and plans using ArcGIS, to evaluate development feasibility studies, or accompany reports and permit applications.

He has continued his education with classes at University of Massachusetts – Amherst, where he completed coursework to further accurately evaluate soils and expand his knowledge of plant biology. 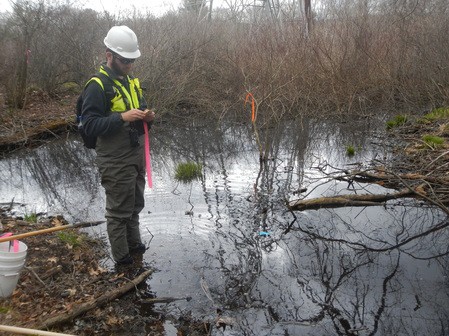 Mr. Cormier is an Environmental Scientist at Oxbow Associates, Inc. a wetlands and wildlife consulting company specializing in rare amphibian and reptile study and mitigation. His field work has focused on vernal pool investigations, rare and endangered plant and animal habitat assessments, and wetland delineation.

Kyle is a registered Unmanned Aerial Systems pilot (FAA 107), and has flown missions that involve cover type assessments, monitoring, and creation of orthomosaics for mapping purposes and tracking land use changes over short intervals, including during the course of construction and restoration projects. He also holds a New York State Stormwater, State Pollution Discharge Elimination System (SPDES) General Permit (#GP-0-15-002).

He earned his Bachelor’s Degree in Biology with a Minor in Earth Science at Fitchburg State University. During his time as an undergraduate he assisted in a research project using DNA barcoding to assist with plant identification, and an independent project comparing invertebrate diversity between upland and wetland habitats. After graduating, he volunteered with North County Land Trust and Mount Grace Land Trust, performing GIS analysis, field GPS, and land stewardship. Kyle is an active board member with Friends of Wachusett Mountain, and has presented his projects at the annual Northeast Natural History Conference. 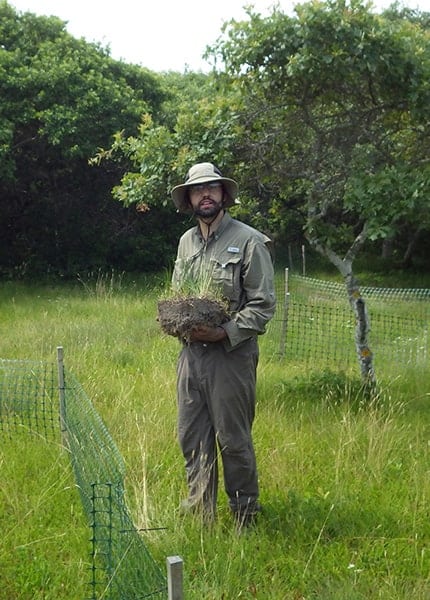 Matthew Charpentier joined OA in 2017 as a Botanist and Environmental Scientist. Matt graduated from the Massachusetts Maritime Academy, and most recently worked with the U.S. Geological Survey in the Mojave Desert as Botanical Technician and previously at New England Wildflower Society. Since joining OA Matt has conducted vegetation monitoring, habitat manipulations and Conservation and Management Permitting for rare plant and insect projects on Martha’s Vineyard and Nantucket as well as botanical work ranging from Cape Cod to the south Berkshires and Connecticut. Matt volunteers with the New England Botanical Club Herbarium and is an active member of the organization. Matt’s experience spans many diverse rare and common taxa found in the Northeast. 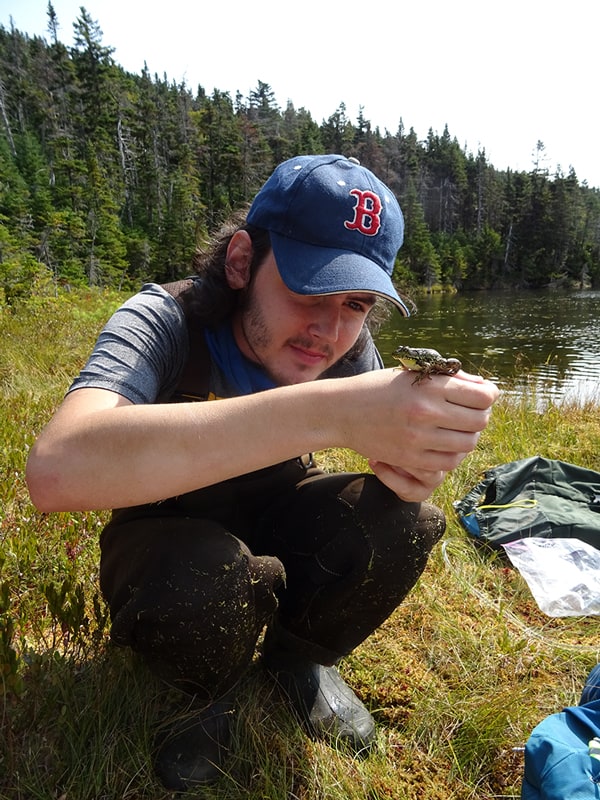 He earned his bachelor’s degree in Biology with Specialization in Ecology and Conservation at Boston University. As an undergraduate, he developed and presented a research project examining the effects of the constructions of the North American beaver (Castor canadensis) on the behavior of the Northern water snake (Nerodia sipedon). He has helped to lead educational trainings and amphibian reintroduction & monitoring efforts at Mount Auburn Cemetery, a National Historic Landmark located in Cambridge and Watertown. 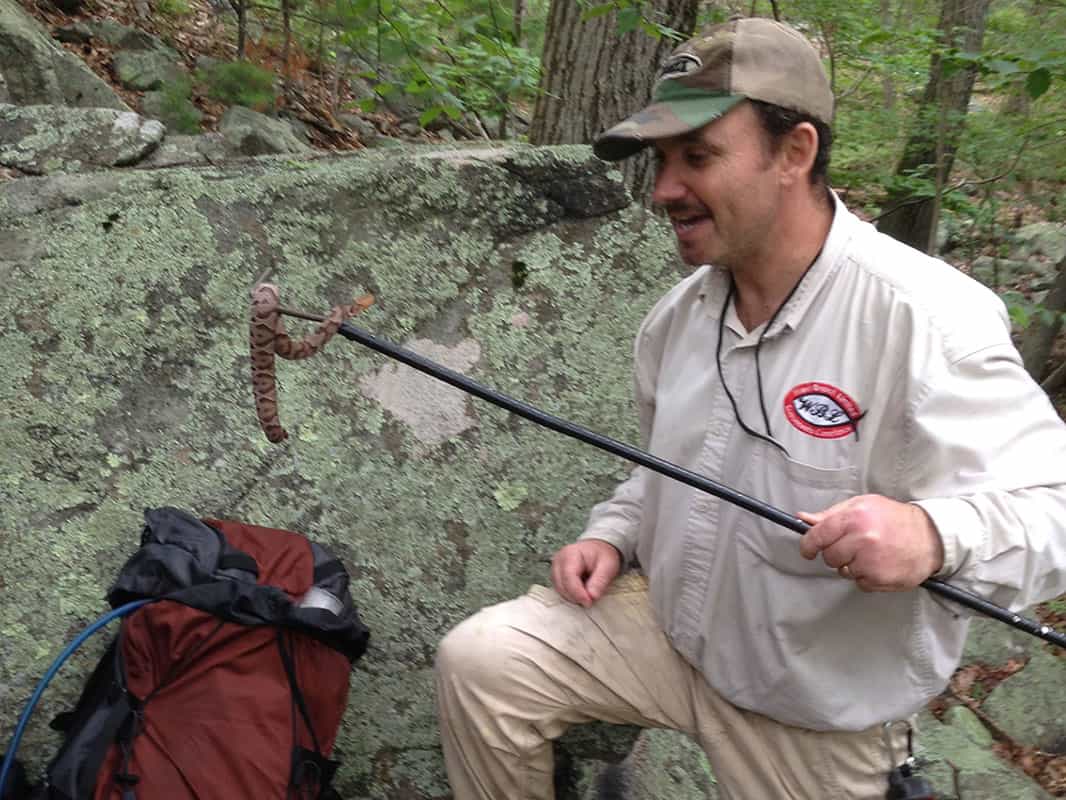 Mr. Tadevosyan is a Wildlife Biologist at Oxbow Associates, Inc. Tigran’s interests cover harmonizing conservation and development. Being a graduate of the Faculty of Veterinary Medicine of the Armenian Agrarian University (1998), and PhD graduated Institute of Botany of The National Academy of Sciences of Armenia in 2002, he has been studying various aspects of applied ecology, population biology, wildlife diseases, and in situ and ex situ conservation, with focus on amphibians and reptiles for over 20 years, and published over 40 research papers, one book, and several web-based resources about these subjects.

Tigran enjoys the mix of the field and office tasks and doesn’t hesitate to get his hands dirty at times. In the field he delineates wetlands, monitors construction sites and helps clients to remain compliant with environmental regulations and conditions prescribed by the environmental protection agencies, and surveys his favorite snakes, turtles, salamanders, frogs and toads. Being versed in a variety of survey techniques including visual, trapping, time-constrained individual counts, and mark-recapture surveys, radiotelemetry, GPS data-logging, and statistical and machine learning based technologies, he pools and analyzes the field data using to better understand where, and when to find the target organisms, to increase the productivity of work. Proficient with a broad range of amphibians and reptiles including state-listed species, and venomous snakes, Tigran is approved primary venomous snake monitor/handler in several states including Massachusetts and New Jersey. He also prepares a variety of permit applications such as (NOI, MESA reviews, monitoring reports); develops and maintains geographic information systems (GIS), databases, prepares maps, conducts research, and analyses data using a variety of methods and software packages.

Mr. Tadevosyan is a Director at the New England Herpetological Society, a founder of the Snake Conservation and Applied Research Facility (SCARF), member of the Society for Study of Amphibians and Reptiles (SSAR) and Massachusetts Association of Wetland Scientists (AMWS). 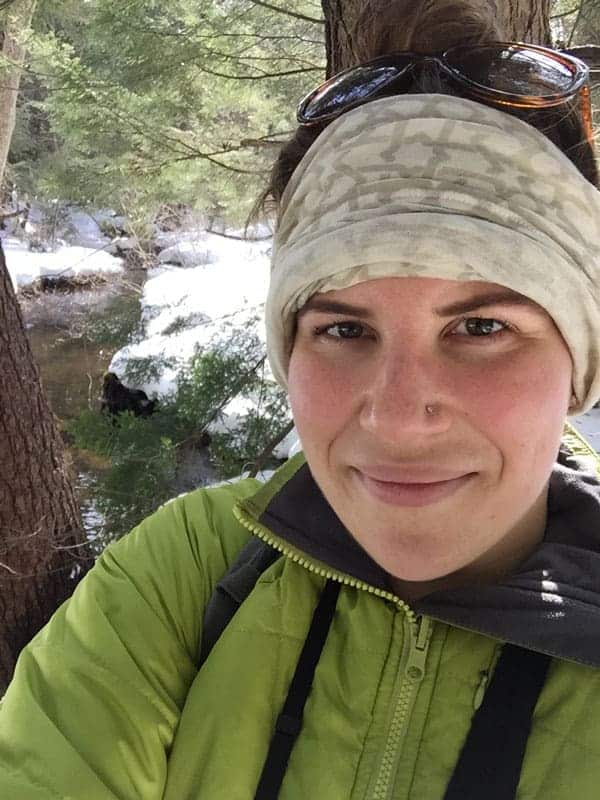 Erynn is thrilled to be back on the Oxbow team, this time serving in the administrative role.

In 2012, Erynn completed her bachelor’s degree in environmental science from Framingham State University. While obtaining her bachelor’s degree, Erynn interned for the Massachusetts/Rhode Island Chapter of the American Chestnut Foundation where, in addition to working in the various Chestnut orchards across the state, she analyzed the 0-4 year bracket of growth data for percent survivorship of the different pollen lines used in the effort. At the inaugural Undergraduate Student Research Conference at FSU, Erynn presented her work and research: “Ecological Complexity of Single-Species Restoration Projects. Case Study: The American Chestnut Tree”.

Erynn then worked as an Environmental Scientist I & II for Oxbow from 2012-2016.

In 2015, Erynn and her husband were surprised to learn they were expecting twins, and so from 2016 to 2021, she worked caring for their sons full time. The pay wasn’t great, but the job was rewarding!

The fall of 2021 brought more change: the boys started elementary school and Oxbow was in need an Administrator. Erynn is now responsible for the overall business operations and administration of the office, as well as assisting staff in the preparation of filings with local conservation commissions and assisting in the preparation and editing of project proposals and reports.